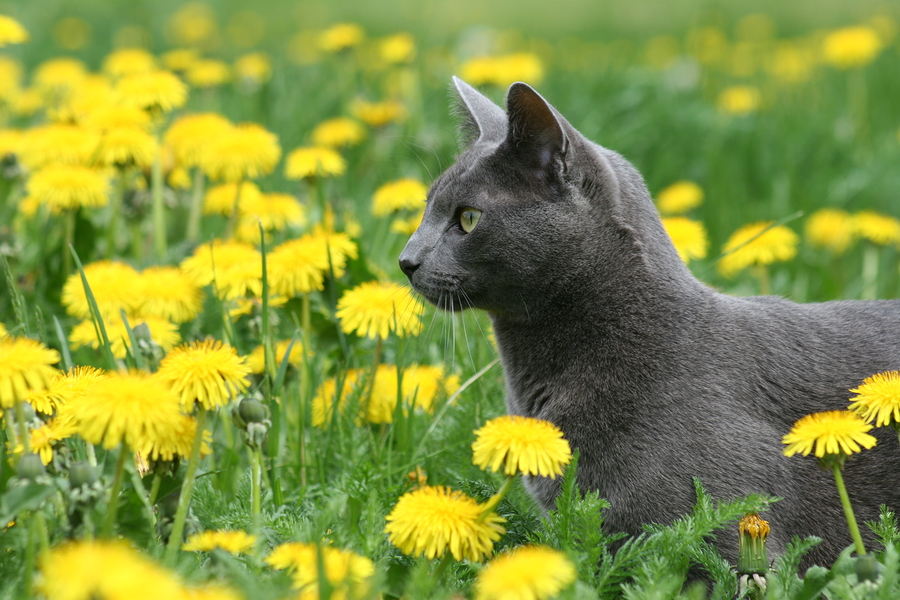 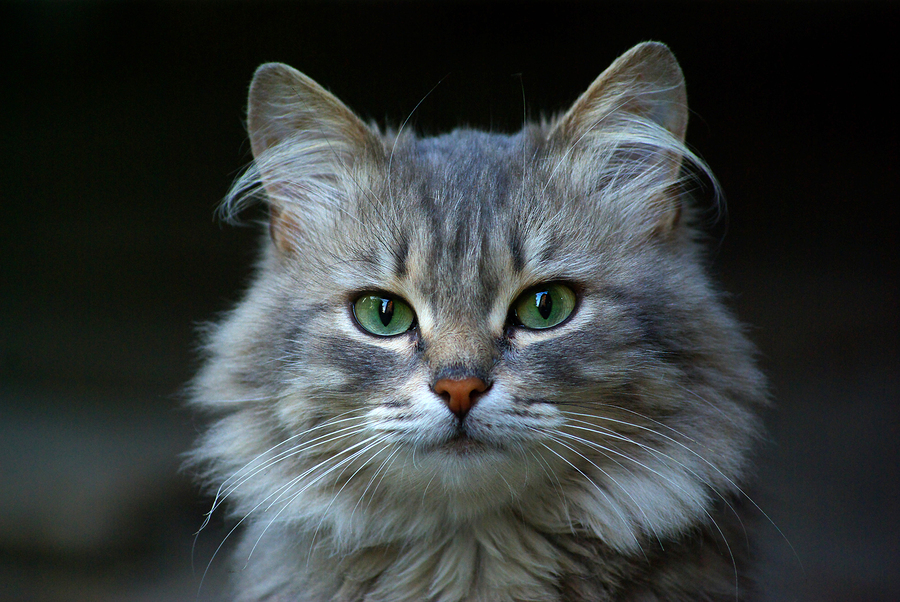 Cat Spraying
The most common problem brought to me with cats is toilet training in the home. This may seem strange to most cat owners who believe that cats are not only easily trained but for the most part train themselves when provided with a cat litter tray. Training cats to be clean is certainly on the whole less troublesome than dogs.

Most cats which toilet about the home, to the annoyance of owners, do so because of insecurity, conflict or a more unusual psychological state, which triggers such an action. This is especially true when the cat has previously been clean. Marking territory (spraying) is another area where cats can upset their owners. One cat I knew used the owners’ pillows on their bed for this purpose to the consternation of everyone.

To understand why cats urinate or defecate about the house and not in the desired location, e.g. the litter tray provided, we have to understand a little about their wild, non-domesticated cousins and how the cat evolved. The cat in the wild is a loner, has a large territory and rarely meets the opposite sex except for courting and mating purposes, which is once a year. The European wild cat has a territory of about 150 hectares, the female’s is about a fifth of that area, but the density is generally dictated by food supply. Compare this to an average house and garden.

Natural Marking of Territory
Cats, like most animals, mark territory using faeces, urination and scent glands. In the outside world cats will mark certain favourite areas or specific objects like tree stumps and bushes to help maximise their scent that signs to other cats “keep out this is mine!” The cat is instinctively a clean animal and fortunately for owners, most cats, due to their evolutionary territorial marking behaviour, quickly learn to toilet in cat trays. The proliferation of various substrates, which can be clay, soil, paper based materials to simulate soil and leaf litter, help give choice and can be helpful with certain toilet training problems. When of course, for a plethora of reasons, this system breaks down and the cat is spraying about the house or leaving faeces in places we rather they did not, people quickly call me for help. Some cats simply miss the litter tray, these generally need encouragement and/or larger or different trays.

Spraying
This can be executed by dominant or less dominant cats, depending on their social status within their territory, including pressures that may be real or imagined. A territory is what a cat deems it to be – your house or garden. Spraying can result from conflicts with local cats or cats within the same household.

Non Spraying
Territorial marking of a non-spraying type involves urinating or defecating in the wrong place (only, of course, according to the owner). These actions make the cat feel more confident; it is making a statement to other cats and if your cat is fearful or of the dominant type, spraying behaviours can be triggered. Litter trays with corresponding litter (substrate) are, for the average cat, quite acceptable. For the cats which are causing problems, however, the shape of the box, the type of litter, its positioning within the room or perhaps the room of the house in which it is kept can be a big deterrent to the cat becoming house trained even when up to that point all has been well. The presence of new people, especially children, can affect the cat’s toilet habits. Cats are by nature subtle, sensitive and affected by minor environmental changes.

Is this the problem – Substrate Dislike, Litter Tray?
Cats can either instinctively or learn to take umbrage when presented with certain types of substrate. Texture and smell are primary motivators to this attitude. Very coarse gravel-type material is less likely to attract a cat than fine soft types. The cat tray may be the covered type, because some cats prefer privacy whilst others do not. Even the depth of the litter is encouraging or discouraging to a fussy cat. The types of disinfectants used can also be a deterrent to a cat toileting in a litter tray. Trial and experiment often solves these issues, although not as quickly as many owners would like.
When a cat always avoids direct foot contact with the substrate and stands outside the tray and projects its urine at it (or at least in the general direction) then the litter may be the culprit – try a different brand.

Is this the Problem – Litter Tray Location?
Try moving the tray if the cat toilets outside it consistently or change it for a new one completely; again, a new substrate and/or new location might also solve the problem. Other dissuasive signs to look out for are noises. Cats have an acute sense of hearing. Some high frequency noises from electrical devices can be very off-putting to the discerning cat. More obvious ones like washing and dish washing machines or ‘fridges, loud music or sudden vibration sounds from clanking hot water pipes could also disturb your cat’s toileting behaviour. The animated behaviour of toddlers nearby or the bumptious actions of another pet like a dog or puppy may be the sole cause; again, you can experiment by placing the litter tray in a more peaceful location or remove the trigger/fear from the area (the toddler or dog, etc.). Shy or fearful cats may be affected by the most mild, innocuous change in environmental noise and sometimes one has to ponder what has changed around the time of the cat’s breakdown of using its litter tray. It is like detective work.

Is the Problem Medically Related?
Good health – checking out your cat’s ‘water works’ is not such a bad idea especially if the change is abrupt and unusual. I recently dealt with a lovely 7 year old Persian cat that had never been 100 % clean but, since the arrival of a new baby, had started to defecate on the dining room table and a few other unsuitable places around the home. The obvious was clear – anxiety – however, my modification suggestions proved only partly successful. The cat was very thin, but the owner told me that it always had been and that she had had it checked out by a veterinarian previously for the same reasons. Despite it being unusual that a toilet training problem is medically related (excluding elderly cats) I instinctively requested that the cat be examined again. The owner telephoned me and stated that the cat was perfectly well according to the veterinarian. Three months later it died of cancer and another vet believed this was part of the cause of its toilet training problems. Veterinarians can only make certain physiological health checks, for behaviour/eliminating problems. The behaviour practitioner has to work within this remit.

Marking Territory
The domestic cat does not have to compete for territory like its wild cousins so the constant need to mark out territory is far less. This does not mean that some won’t and when under the following circumstances marking territory can be activated or increased in frequency.

Aggression: When aggression is in the air a dominant or insecure cat that cannot behave will assert itself to protect its territory (inside or outside the home) or its cat group.

Anxiety: Changes in the hierarchy of its social system, other conflict within the same household, environment or area.

Is The problem Spray Marking?
A stream of urine directed at an object or a vertical surface (see previous “Other Causes: Marking Territory”), as opposed to a pool of urine (normal urination) indicates spray marking. It is a calling card to other cats: “This is my patch!”  Bold cats, aggressive cats or an insecure cat that feels threatened may spray-mark often.

Is The Problem Faeces and/ or Urine Marking?
Marking areas of territory using faeces and urine may appear like the earlier described problems, but can and often are triggered by similar reasons as in spray marking above. Feline marking behaviour is probably simple and very understandable to a cat, but it is quite complex to us. The behaviour practitioner, often through a long series of questions, has to identify the causes in such cases before advice can be proffered. Visitors may be the associative cause of spraying behaviour; if so, cats often, but not always, spray the room they have slept in. One of my friend’s Burmese always sprayed in the sink of the guest’s bedroom the following day. This, of course, made the problem identification easy. Filling the sink with water the following morning did help. The solution, however, was not so easy as this was one determined by the cat.

Multi-Cat Households
Spray marking problems occur more often in houses were there is more than one cat. The more cats in one house/area the higher the probability of spraying. Cats are by nature loners and although they amazingly adapt to living in close proximately to their fellow cats, it is not nature’s way for this species. When we make the decision to own a pet, it is generally an education in the ways of another species. Overall, cats make delightful and loving companions and from their point of view, there are no problems.

Castrating male cats will prevent spraying in approximately 90% of male cats, spaying prevents about 5 % of females spraying. These are guidelines only.

Consider reducing the number of cats in the household to that prior to the spraying problem.

Close the curtains so that the visual fear/aggressive stimulus is removed, if your cat sprays upon seeing other visiting cats enter your garden.

Place the cat’s litter tray elsewhere and place the food bowl near/on to the area being sprayed, if the cat is spraying in specific locations only. (Cats rarely spray near their food source.) As an alternative, place mothballs or spread tin foil over the area that is spray marked. Cats dislike the smell of mothballs and the feeling under pad of tin foil. You could also place cardboard boxes or large ornaments as obstructions in the cat’s pathway to spraying.

Cats that only spray in specific rooms (on beds, etc.) should be closed out of the room affected were practical; if caught early enough this should stop the embedding of the problem.

Finally, never punish your cat for any unwanted toileting behaviour, because they will not relate their action to the punishment given. Instead, they need redirection and your understanding – that is cat care.