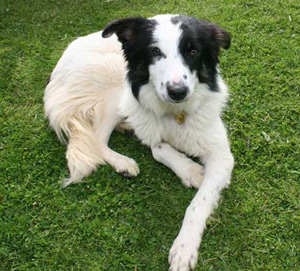 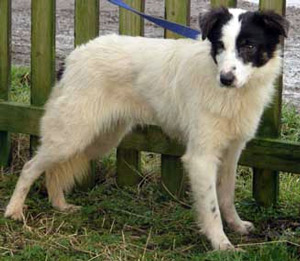 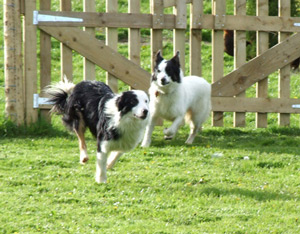 Our little deaf rescue dog Drift has a home. He is now safe and happy along with Bobby, one of his friends from the barn they were rescued from, but he has left a legacy of unbelievable knowledge behind that I, for one, will never forget and will always be grateful to him for.

Over the years we have rescued deaf dogs, all of which have had behavioural problems and most of which have stemmed from not enough management and far too much toy orientated information. Hearing dogs that get wound up by just seeing a toy can be difficult to manage, but when a dog is deaf it is very difficult to break through its barrier of manic focus on the toy to get some attention and some manners from it.

In many cases owners have tried to get the dog’s attention by showing it a toy or a treat, which in theory gets the dog’s attention thus encouraging it to engage in some form of communication. However, what has happened in the case of our rescues has been quite different in practice. The dog becomes so focused on its treat that it completely bypasses the owner and any contact they try to make. A deaf dog can only know there is something on offer if it can see it, because it can’t hear any noise; consequently it begins to look for some kind of object as a permanent form of entertainment rather than trying to communicate with a living being. Some of the deaf dogs we have taken in have been hyper, some have been so ball or toy orientated that they haven’t known how to relax and enjoy human company. Many have become tail chasers as they seek to keep themselves entertained, having been denied the simple pleasures of a human and companion dog relationship. In all cases they have been dependant on some form of object, game, toy or ball to form any kind of communication.

We don’t communicate with toys, but use ourselves and our body language. With Drift we had a dog so natural and so responsive that in many cases he became our dog mentor in return for our human mentoring.

Drift was about nine months old when he came to us and he had spent most of his life shut in a barn. He had not been physically abused, but he had been neglected, was undernourished and like the other dogs that came in with him, he was a pack dog.

Puppies will form a puppy pack and when they leave to go into their new homes they need the same kind of mentoring and boundaries that they have received from birth from their mother. Drift was still part of a pack, but was now in adolescence so we gave him the same kind of instruction we would give to a puppy. He needed to know that he could trust us as well as a form of communication with us. He was used to trusting Ben and Bobby as they had been his ‘ears’ for a long time, so when he was given a pen of his own he needed someone else he could rely on and someone he could understand.

Right from the beginning I only spoke my thoughts to Drift, I never even attempted to call him or to give him verbal instruction. The body changes with each thought process and a dog will pick up on body smell and posture, but sometimes our thoughts are masked or are not clear enough. For that reason I spoke many of my thoughts aloud, not so that he could pick up sounds, but so he could ‘hear’ with his nose. When I went into his pen I didn’t just think that I loved him, that he was special and that he was safe. I said it quietly to myself. This put my body into the right kind of ‘smell frame’ – for want of a better explanation – then I would stand in the doorway with my back to him, talk to him for a moment and then walk out into the building. It wasn’t long before Drift followed me out.

This was the format for quite some time; we didn’t even try to advance to another stage. It was nearly two months before Drift was ready for a new learning curve, but in that time he had learned to walk on a loose lead. When he was unsure of anything he stood behind me and when he did walk freely around me he never went more than a couple of strides in front and he always kept an eye on me to make sure his ‘safety net’ was still in tact. When Drift sat down I began using a hand signal and each time he came to me I welcomed him with my body language; it wasn’t long before the hand and body signals preceded the action.

What amazed me were other people’s reactions to his progress or rather in their eyes, lack of it. Remarks such as, “you’ve had him for three months and he doesn’t know anything yet” or “so what else does he know, he needs to learn tricks to keep him busy”. Then the one that really got to me, “you can’t use those hand signals they’re not the proper ones”.

One – after three months he knew a lot, in fact he knew all he needed to know. He walked well on a lead, off the lead he rarely left my side and when he did he kept a close eye on me. He came when I signalled him and he both gave and received lots of love.

Two – he certainly didn’t need ‘tricks’ to keep him busy, he was happy being my pal.

Three – as long as the dog understands the signals given what does it matter if they are not the ‘proper ones’? I was told I had to lift my hand for him to sit, but to me that wasn’t natural. All I did was allow my body to carry out my thoughts and then encourage Drift to apply my body language to his actions.

After a trip to the vet to remove a hernia, Drift moved into the house. In a cage in my hall he was a clean and peaceful chap and when I let him out he either followed me round or played with the other dogs. After about a week his confidence grew and he became more than a little cheeky. On one occasion he sneaked under the yard gate and set off down the drive, there was no way I could call him back, but there was no need to worry; as soon as he realised he was on his own and outside of my protective pack area he came racing back as if he had a mad dog chasing him. Drift soon discovered which of my house-dogs would encourage him to play and which would put a definite stop to any of his antics. He was almost becoming one of the family and for that reason he was moved back into an outside pen. We had already asked ourselves if we should keep him and could we justify denying him a relationship with someone where there were less or no other dogs vying for attention? In the end we decided he would stay with us until the right home turned up for him and if it didn’t, then we had gained another resident.

Once again we received criticism, because we should be letting him go to someone who would ‘work’ him. He should be doing agility or something to keep him occupied. Drift didn’t need occupying, he was perfectly capable of amusing himself and he was extremely content. We were never short of people wanting to adopt him, but the reasons were often totally unacceptable to us. From wanting a deaf dog so it wouldn’t be scared of fireworks, to feeling the need to have a challenge. We also had someone who thought it would be good to have a deaf dog as the one they already had was blind so they could help each other. There were also some really good potential guardians for him whose circumstances were just not right at that time to take on such a commitment. So we waited. What we needed was someone who wanted Drift, not because he was deaf, but because they loved him. Finally his forever home turned up with two smashing people who not only loved Drift, but also our Bobby. So they are now together on a smallholding, forever friends and with nobody putting great expectations on them; they don’t have to ‘do’ or keep human beings entertained. They can simply be themselves and that’s what every dog deserves.

The one thing we all need to remember is that being deaf is not a problem for a dog, it doesn’t know any other way of living. Having a deaf dog is not a problem. The problem is the complicated way we humans try to deal with it.

This article has been reproduced with the kind permission of Barbara Sykes for the CFBA, the CIDBT and their students of Dog Behaviour & Training