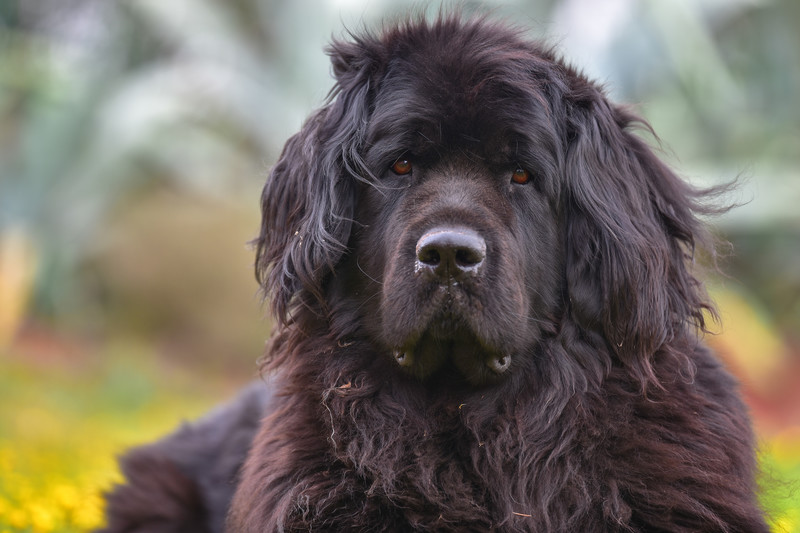 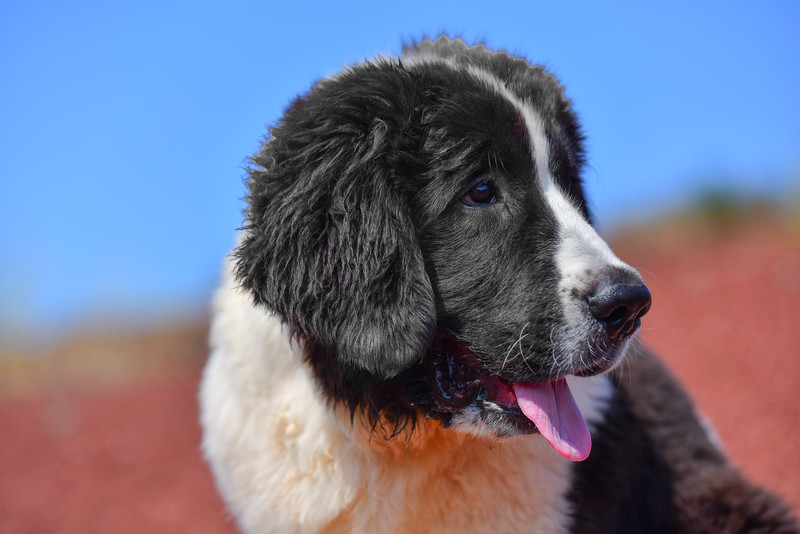 Barney is a large Landseer (i.e. over 10 stone in weight). He has a dominant attitude, is certainly aware of his size and uses his strength to get his own way. He constantly seeks attention and will steal anything to achieve his aim, but he doesn’t destroy or rip up the objects – merely covers them in slobber!

Barney can become aggressive if he is thwarted; he will grab clothing or arms and will growl whilst he hangs on. Up to date, his teeth have never penetrated skin, but clothing has been ripped. Barney is a very intelligent dog that learns quickly, which means that he can not be tricked more than once.

He spends his nights downstairs in the house. At first he wandered from room to room and slept in various places on the floor. We then found that the settee was covered in hair in the morning – so we placed obstacles on it, i.e. chairs. He quickly learnt to push the chairs off and lie on the settee again! He also tried to get on to a wide shelf, where our hi-fi was resulting in him knocking if off and damaging it. We then shut the door to the living room when we went to bed.

Barney then proceeded to sleep in the dining room where he attempted to get on to the sideboard, resulting in the smashing of an antique plate. We also found him lying on the dining room table when we got downstairs in the morning.

So, we decided that he had better sleep in the living room on the settee from now on! The settee is covered in old blankets and bedspreads, which protect it from slobber and hair.

Barney, since a puppy, has never been allowed on the furniture and he doesn’t go to bed (settee) until we have gone upstairs.
When we are out, the living room door is shut and Barney divides his time between the kitchen and the dining room. Occasionally, he has been found on the dining table on our return home!

A few months ago, Barney decided that he wanted to come upstairs with us at night. We have always had a baby gate on at the foot of the stairs to prevent this, but unfortunately, Barney’s need became paramount so he started pushing himself over the gate, then bounding upstairs to take comfort on whichever bed he could gain access to! We then increased the height of the gate by attaching part of a fire-guard. This stopped him pushing his way over and peace reigned for a while….until he found that if he stood on his back legs he could manage to push the baby gate and the fireguard over with his front legs. Again, Barney had access to upstairs.

We then moved the baby gate to the top of the stairs thinking that he would have difficulty climbing over the gate whilst standing on a stair. It took Barney a couple of weeks to work out a solution; to bound up the stairs and jump over the gate. So, we have replaced the fireguard to increase the height again. At the moment – we win!

Barney stands at the top of the stairs and gazes at us through the bars whilst we get ready for bed. He finally goes downstairs and to bed on the prepared settee in the living room. Barney does not bark from the other side of the gate, fortunately, because he previously learnt that barking gets him nowhere.

Another problem with Barney is stopping him accompanying us when we go out. He doesn’t like being left behind. At first a simple ‘sit’ and ‘stay’ were sufficient, but as he grew older and larger, problems arose. I train Barney everyday and constantly make him sit, down and stay, yet he ignores all of this when we leave the house. Barney would use his size and strength to push past us and out of the door. We slammed the door shut on his head on a couple of occasions and this stopped him for a while. Being Barney though, he soon overcame this by being faster through the door so that we could not shut it. Hence another baby gate which is now placed halfway along the hall. This worked for a while, until, again, he learnt to push his way through the gate.

We then developed a method of distracting Barney with a treat. This is given to Barney as we walk towards the gate. As Barney stops to eat the treat, we go through the gate quickly and out. Sometimes Barney will ignore the treat and will barge through the gate; if he does this, we then have to put two kitchen chairs on either side of the gate and climb over!

When only one of us is leaving (the other having already gone) Barney is much calmer. He accepts the treat and calmly allows you through the gate, however, if both of us are leaving Barney tends to be more frantic and the chairs have to be used to get out.

When one of us is leaving and the other is remaining at home, then Barney will jump up and grab clothing, handbag etc., in an attempt to stop you (I think).

However, Barney really enjoys confrontation to amuse himself and have fun. We stop him by one of us holding him or by using an ultrasound trainer.

At present, these problems with Barney are managed, but we are aware that he will in all probability find a way of overcoming our strategies. It is in fact a contest of willpower and brains that we intend to win – being a superior species to the wolf!

PS Barney has just recently decided that he would like to stay outside all night. He will not respond when called and will turn away when approached, consequently he has stayed out all night on several occasions. This is not ideal, because he could bark at cats etc., and has no shelter.

At present, we prevent Barney having access to the main garden after 9pm by closing a gate on him. In the New Year we are planning to buy a shed and will arrange for a stable door to be fitted so that the bottom and top can be closed independently.